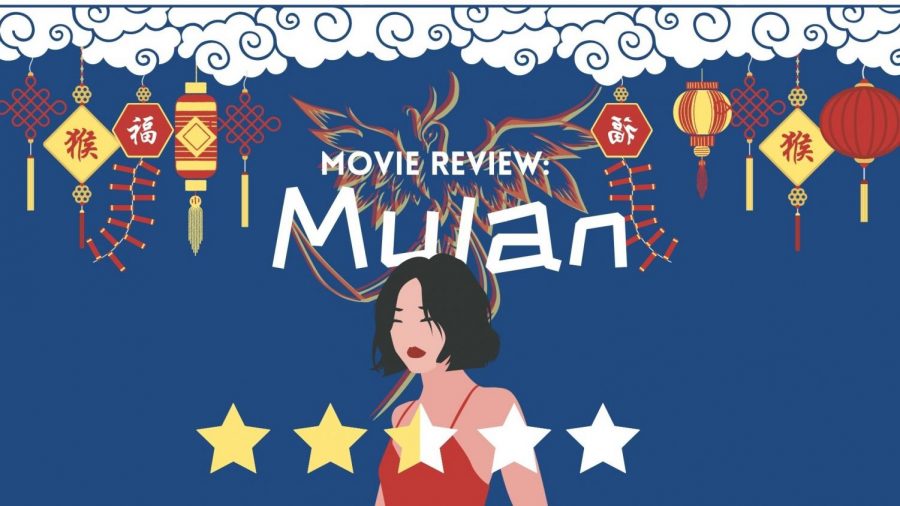 Since the release of a live-action Alice in Wonderland in 2010, Disney has pushed out an impressive 13 live-action classics, the most recent being Mulan on September 4th, 2020.

Available with a $30 streaming fee until November 4th, when it will be free to all Disney+ members, the intense combination of vibrant colors, traditional Chinese scenery and a beautiful all-Asian cast make for a stunning two hours.

Unfortunately, the loveable Mushu was not present, but rather replaced by a phoenix. While the phoenix was a beautiful addition, the absence of such a well-loved character was taken with much disappointment by viewers.

The magical elements were installed in different ways than in the original animation. In my opinion, a positive example would be the fact that animated Hun leader Shan Yu’s falcon is a shape shifting witch in the live-action film.

However, I’d consider a negative example to be the film’s more realistic portrayal of battle. The image of the Huns appearing over a large snowy mountain and rushing towards the Chinese troops is a beautiful and familiar scene, but in the live-action there is only a small troop coming over a dry hill.

Part of the allure of many Disney princess classics is the musical aspect, as the animated Mulan boasts a 6-song soundtrack with classics such as “Reflection” and “I’ll Make a Man Out of You.”

The live-action rendition includes not one familiar nor original tune, and for those that dislike musicals, this may be considered a win. However, many Disney fanatics are lovers of a good soundtrack, and therefore this alteration may not exactly be taken in with open arms.

As for the pace, the film had a rather fast beginning and transition to middle, but the running time of scenes in the second half felt awkward in comparison to the first half of the movie. I felt that as the movie turned to its final third, it began to feel rather drawn-out.

Getting into the numbers, critics at Rotten Tomatoes rated Mulan a 75%, while the average audience member rated it a 51%. While the artistic appeal may have been strong, it is evident that its general appeal to the audience was not as successful.

For viewers who hold the original plot, characters, and overall feel of Mulan close to their hearts, the live-action adaptation may not live up to one’s expectations. However, if you are somebody who appreciates the realism of live-action and stunning stills, this may be more up your alley.

If you want a picture to show with your comment, go get a gravatar.