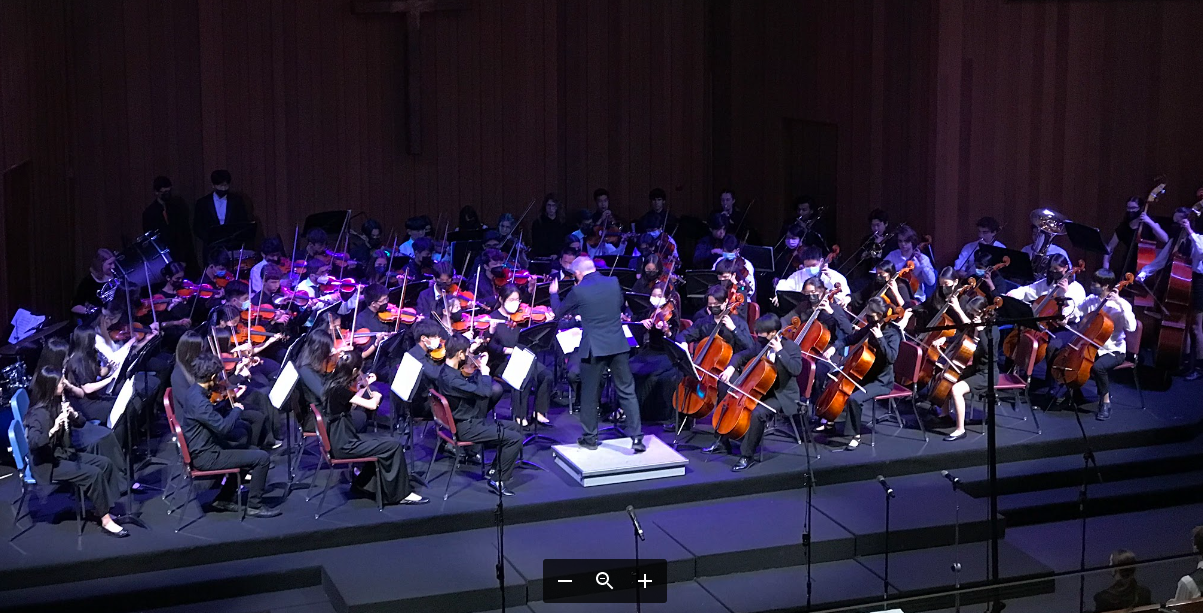 The school year is coming to a close, and so are Amador’s band, orchestra, and choir performances in the last weeks of May. Groups instructed by Mark Aubel, Edwin Cordoba, and Jonathan Grantham played for the last time this school year.

On May 19 at Valley Community Church,  all senior ensemble members completed their final high school performance: the Summit, also the farewell for retiring teacher Aubel.

His thirty-six years of teaching, eighteen of which were at Amador, brought many more opportunities for countless people to have been influenced by the choir, orchestra, and jazz educator.

“I’m fortunate to work with some super talented students and just beautiful people. I was very happy getting to perform in person again after a long time of not playing in person. So it was nice to have a live audience and play with the large group,” said Aubel.

Amador’s principal Joshua Butterfield had been taught by Aubel and to dedicate the years of work Aubel has brought to all the programs he’s instructed, Butterfield brought together a jazz ensemble of past students and Aubel’s children to play for Aubel.

The night was filled with speeches and music in dedication to or related to Aubel’s last Spring Concert such as the String Orchestra’s performance of “Final Countdown” with the accompaniment of Concert and Chamber Choir. Jazz A and B, choir ensemble, and symphony orchestra all performed under Aubel’s conducting.

“I’m very thankful for Aubel, for all…he’s taught us and just sticking with all the amazing groups at Amador, and I hope he knows that the whole program just wants him to know that we’re really sad that he’s leaving, but are so thankful for all the support that he’s given us,” said orchestra performer Stella Dormer (‘23).

The second band concert, Reverberations, located at the Bankhead Theater on May 24, was an acknowledgment of student’s dedication toward the band program and band director Grantham’s 20th year as an instructor at Amador.

“It was extra special because of Mr. Grantham’s commission. We had a piece written for his 20th anniversary. The composer [John Mackey] was in the house and it was really, really cool to see- to have him there and to get to share that music with the community,” said Cordoba.

Wind Ensemble I performed the world premiere of “A deep reverberation fills with stars,” a  tribute to the two decades Grantham has spent giving his time and instruction to Amador’s music students. They also performed “Elsa’s procession to the cathedral” in memory of Grantham’s mother Gayla Grantham.

The concert consisted of performances from Wind Ensemble I and II, a Saxophone Ensemble, and Symphonic Band Purple. Directors gave senior recognition to all graduating students, no matter their length of participation in the music program. They also shouted out and awarded noteworthy performers who gave back to the program.

“My last performance kind of was melancholy surreal, you know, cause this performance was like the culmination of my four years in band. Like how I dedicated a lot of my time during high school, during the long rest of the performance, I definitely had time to ponder about my time and journey through the band,” said Gryphon Kmfert (‘22). “I’m finally finishing this journey of high school band, which I think has definitely made me a better person.”

The concerts came to a close at Valley Community Church on May 26 with Amador’s Concert Band, Symphonic Band Gold, Jazz Workshop, and individual collage performances. Students could play music of their choosing with their friends in groups of any size.

Some chose to sing, such as senior Julia Szambelan who harmonized “Song to The Moon,” while others took the opportunity to perform in a different way than the band ensemble classes, like junior Wilson Xie, who improvised a pen-tap-beat.

“I really like the way the sound bounced around the church…that was just a really cool effect for our group. I think it went really good…Overall it was like, it was a really cool, really fun experience,” said collage performer Vardaan Singhania (‘25).

The 2021-2022 musical year ended with recurring song “September” played by the Jazz Workshop. The performers and ensembles synthesized everything they’ve learned throughout their time in the program coming to a close with seamless concert performances.

“They bring a lot of heart to everything that they do. It has been an absolute pleasure to get to work with these students,” said Cordoba.