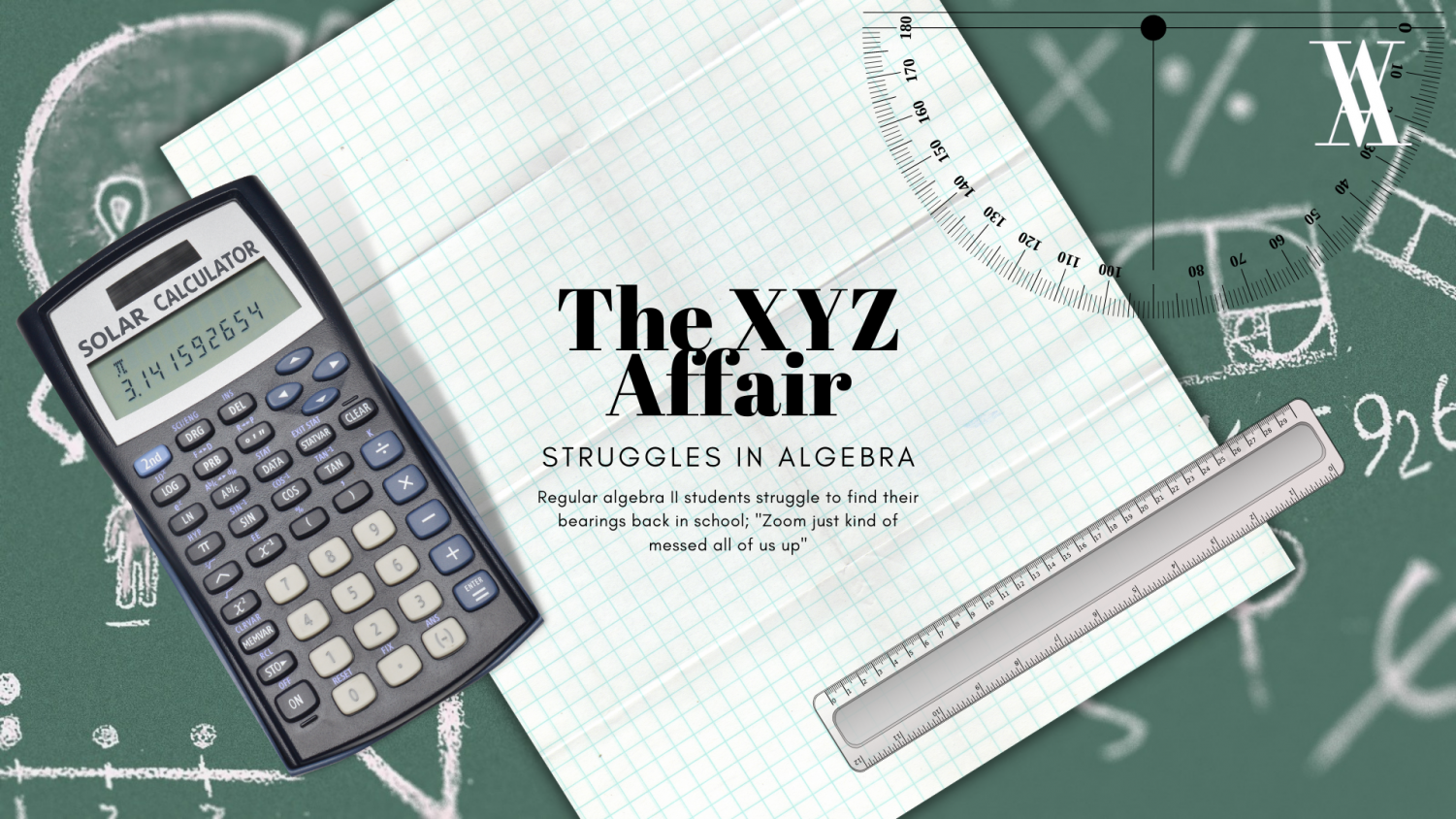 Since the return to in-person school, the Regular Algebra II classes have seen a spike in students failing tests. Our reporter launched an investigation to find out why. (Carol Xu)

Since the return to in-person school, the Regular Algebra II classes have seen a spike in students failing tests. Our reporter launched an investigation to find out why.

Returning back to in-person learning, the regular Algebra II course has seen student grades on tests drop more than any other math class at Amador. Administrators noticed a huge spike in Ds and Fs among those students, and in October the math department sent out a mass email relaying their concerns to families.

“It was not anticipated that students would struggle this much… [but] we can say that for most students, we were wrong,” said the email, “Students have continued to score lower than their predecessors on similar exams, despite extra instruction and prep time on the standards being assessed.”

While all students have been struggling this year in math, why have the Algebra II students found the adjustment particularly challenging? Turns out, the key lies in the atypical circumstances those students experienced over distance-learning–circumstances so detrimental that, with the first semester almost over, students have yet to recover.

Nation-wide, teachers and students agreed that math over Zoom was, to say the least, tough, no matter which course they taught or studied. The learning loss effects, though not irrevocable, could be devastating, according to three different studies from Northwest Evaluation Association data that predicted half to a full year worth of learning lost in math. 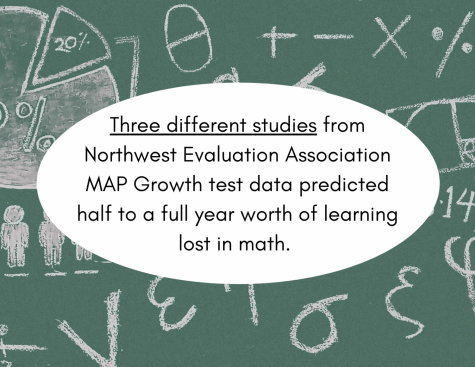 “Zoom teaching isn’t exactly great for maths, so we’re all like a year-and-a-half behind from our first half year of math [in 2019], and then the whole year on Zoom just kind of messed all of us up a little bit,” said Algebra II student Alena Gagnon (‘23).

Part of this was how teachers couldn’t directly see their students’ calculations and thought process in working out an answer, which impaired their ability to assess what students were doing right or wrong.

“Students didn’t necessarily have access to show me their work easily, so a lot of times they would have the wrong answer and they’d try to explain to me what they did, but I couldn’t see what was happening,” said Honors Pre-calculus and AP Statistics teacher Colette Woodruff-Tropp.

Algebra I and II teacher Kyle Riddle used to regularly walk around his classroom to check on student progress, whereafter he could make minor tweaks to his lesson plans to help students understand concepts better. But on Zoom, he couldn’t catch small mistakes as often.

“I wasn’t able to make those small tweaks, and those small [mistakes] turned into bigger problems and then it kind of spiralled out of control for certain aspects,” said Riddle, “Then when quizzes and tests came around, I could see [the mistakes], but it was a little bit too late to fix them and make them small tweaks.”

For Algebra I and honors algebra II teacher Samantha Allen, online classes forced a change in her teaching style from an interactive and student-based design to a heavily limited teacher-centered format.

“A lot of what I do, for example walking around and going to the different [table] groups, wasn’t feasible on Zoom, so it was very lecture-based, like it was pretty much me talking the whole period,” said Allen.

Over Zoom, where the majority of students avoided showing their faces on camera and muted their microphones, those who needed help had less confidence and motivation to reach out to their teachers.

“Doing math in-person is better, because when the teacher’s working through a problem and you don’t understand something in the middle, like ‘how did we get that number out of nowhere?’ you can straight-up ask them and it’s just easier to communicate that way,” said Mark Attia (‘23), a junior in Algebra II.

Zeroing in on Algebra

What makes learning math unique is that its advanced concepts directly use and build upon previous ones, so establishing a strong foundation is crucial. This linear progression of ideas gets blocked when students carry on knowledge gaps or mistakes from prior units. 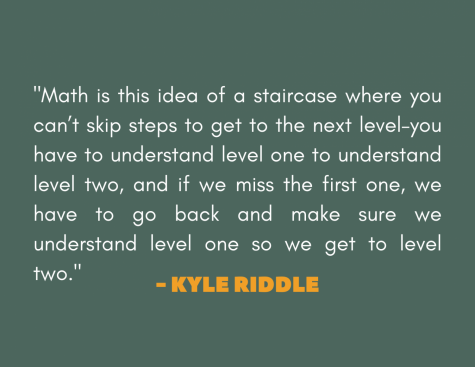 Mandatory for all students to take in order to graduate, Algebra I is considered an essential “gatekeeper course” in math by educators in the U.S., as it establishes a foundation upon which more advanced math classes like calculus and statistics will build upon.

After the abrupt switch from in-person to remote learning in March 2019, the current Algebra II students (then in Algebra I) missed some of the most vital unit concepts and skills that they’d need later on, such as graphing and solving quadratic equations.

“A lot of the things that are covered in the last few months [of Algebra I] are the things that we do everyday [in honors pre-calculus], and what we expect by the time students get to Algebra II is that they have known it and have been working with it for a year,” said Woodruff-Tropp, “And that wasn’t the case this year.”

With the Algebra I step of the math staircase broken, the rest of the pathway toppled. For many in the Algebra II course, the first few units, which in typical years were merely simple review from Algebra I, felt rushed and stressful. It’s not just Amador–67% of U.S. teachers reported student anxiety in their math classes. 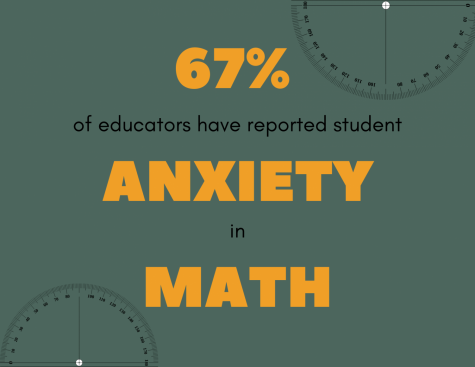 “It felt like new material, and we didn’t have enough review, because many students in my class took [Algebra I] a year ago and don’t have that stability in algebra I because they finished it really fast with the cut-off in 2019,” said Anita Ratna Gautam (’24), “With the harder information which is coming my way, I have no basement for it, like there’s no ground to build it back up from.”

Unlike Gautam and her classmates, the Algebra I students coming in from Math 6 or Math 7/8 had yet to learn the most fundamental algebra skills taught in the class, so their teachers are able to present and cover new material in detail without having to worry about simultaneously teaching more advanced concepts.

“It’s like [the students are] learning the new material as we go, so it’s really not a huge difference from previous years,” said Allen, “The averages for the [Algebra I] tests to be honest are pretty similar to what they have always been, like a C average.”

As for the students in Honors Algebra II and higher math levels, like Pre-calculus and AP Calculus BC, overall grades barely differed from their predecessors. Teachers credit their students’ diligence and strong work ethic as the main reason for the strong grade continuity this semester.

“The Honors Pre-calculus students are doing incredibly well–they’re still showing mastery, and we’re going at pretty much the same speed with the same level of rigor that we have in years previously,” said Woodruff-Tropp, “That just goes to show how dedicated those groups of students are, [because] most students in these classes will work twice as hard if they have to.”

As students and staff alike adjust back to in-person schooling, teachers have discussed and devised new ways to bring the Algebra II students back up to speed, from remediation strategies to creative video projects.

“We understand that things may feel inconsistent,” said the math department email, “Please know that every change has been made in an effort to reinforce either foundational standards or algebra II standards, and to give students additional opportunities to demonstrate concept mastery.”

One of these additional opportunities is unit test retakes, which are offered to any student who scores below 80%. In Riddle’s class, he’s trying to add in as much “spiraling” as possible, a technique that builds in continuous review of old concepts. Allen and other teachers have also begun allowing students to create “brochures” that summarize each unit and can be used in upcoming unit tests.

“As teachers we understand that things are difficult, and especially in difficult classes we want to support our students,” said Riddle, “If there’s something we can help with as teachers, let us know so that we can make adjustments–that’s what teaching’s all about, changing what we’re doing to make sure that it fits and helps every student that we have.”

In the past year, he and Allen both launched YouTube channels, to which they post videos on specific homework problems that gives students another avenue to access more math guidance. The videos also act as a form of reassurance to students that their teachers are completing the same homework problems as them and understand their workload.

“Something positive that came out of remote learning was that I started making videos for every single lesson that we teach,” said Allen, “This year we obviously present the lesson to the students, but then after they can go back and rewatch the video, which was never really an option before.”

Students can also take advantage of Amador’s robust peer-tutoring program to catch up in maths. A March study published by the National Bureau of Economic Research recommends using “high-dosage tutoring,” as in almost daily tutoring, which they found can help students learn two to three times as much as their classmates, and foster more inter-student collaboration.

“Students learn a great deal by explaining their ideas to others and by participating in activities in which they can learn from their peers. They develop skills in organizing and planning learning activities, working collaboratively with others, giving and receiving feedback and evaluating their own learning,” said Professor David Boud in his book Peer Learning in Higher Education: Learning from and with Each Other.

Students in the Algebra II course also came up with their own methods to ace the class. Some found their own tutors. Others decided to self-study ahead. But Attia believes the most simple but effective way to improve is to ask for help from one’s teacher.

“I go to [my teacher] a lot after school to get help,” said Attia, “Reach out to your teacher–that’s the only way to get better at math.”

Although it took some time, the Algebra II classes are gradually getting back on their feet, and the average scores have begun to rise. For Riddle, rather than being a cause for concern, this case signifies the wide potential his students have to succeed and overcome the difficulties from the pandemic.

“I’m not really concerned as far as excited for where [my students] are going to head, because overall they’re capable of being successful in their classes and I’m here for them if there’s anything to help them along the way,” said Riddle.