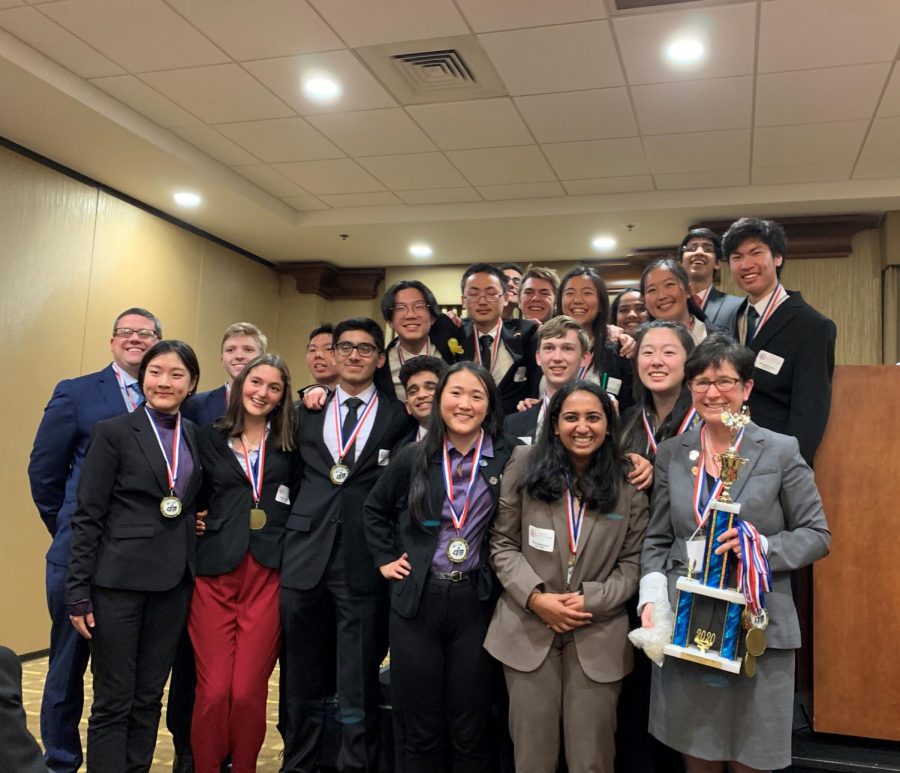 Amador Valley’s Comp Civics team placed first, with Foothill High school trailing close behind taking 2nd place. As a result, both schools will participate in the national competition in Washington DC in April.

“I’m so happy that they can have this part of the experience. They worked really hard, and they did a terrific job today,” said Comp Civics Coach and Amador English teacher Stacey Sklar.

Amador Valley has a history of success at the National Competition, including a 2nd place win last year.

The students have spent hours inside and outside of class this year preparing for the competition. In class, the team was taught the ins and outs of the U.S. Constitution and they spent lots of time practicing and perfecting their competition testimony.

“At first the preparation wasn’t too bad, but after getting our butts kicked at regionals it kind of hurt. Going to State was definitely high-stakes because if we didn’t win then that means no Nationals…so this weekend was kind of terrifying,”said Gloria Xie (‘20).

Each unit on the team spent a majority of the school year gaining expertise in a specific unit centered around the Constitution. At the competition, judges score the teams after they present.

The teams are scored between 1-10 in 6 different categories: their understanding of the constitution, how they applied their knowledge of the constitution to their testimony, reasoning, supporting evidence, responsiveness to the questions the judges ask, and participation.

Sam Weaver is an AV Social Studies teacher who is also one of the other teachers who helps Sklar prepare the team for the competition. Weaver tried to help explain how the scoring works and how the winners are chosen.

“You can have not as strong a testimony, but still do great because of the Q&A, and they’re looking at the overall ideas presented during the presentation,” said Weaver.

AV students inside and outside of the class recognize how much work the team puts into their preparation, which makes this win even better.

“In the last couple of weeks, we barely slept, barely ate, and barely went to school, but hearing them call our name as the State Champions was worth it,” said Xie.

“They’ve put in so much work and so many hours. They’re so dedicated and I’m really glad that it’s all paid off,” said Isla Griston (’20), the TA of the Comp Civics Class.

And of course, they couldn’t have done it without the support of everyone around them.

“We couldn’t have done this without the hard work of Mrs. Sklar, our team, our parents, and everyone who has helped us so far. I can’t wait to see what comes next,” said Carolyne Geng (’20).

While being a member of the Comp Civics team requires lots of time and effort, all the time the students spend working together helps them create a special bond.

“Comp Civics has definitely been the highlight of the year and honestly high school in general. I’m so happy to finish out the year like this and I just want to do it all again because nothing in high school has been better than this,” said Rishabh Raj (’20).

“This is the greatest experience of my life and I can’t wait to experience it for another two months,” said Alexander Prevost (’20).

When hearing the news at the competition’s award ceremony, the team was elated and in shock. While they prepare to strive through more copious rehearsals, the team is thrilled to go to Nationals on April 24-27.

“Obviously, there’s still work to be done, but I think everyone is extremely motivated right now and knows what we need to do, and I’m really excited to go forward and compete in DC,” said Jennifer Mei (’20).

From everyone at Amador to Comp Civics, congratulations, and best of luck at Nationals!