My Time in a Wheelchair at Amador 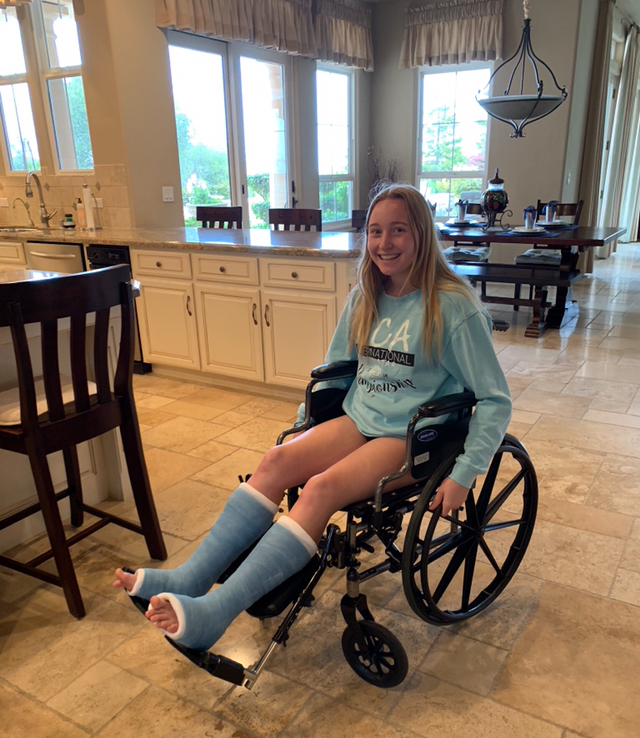 After breaking both ankles in a cheerleading routine, Linzee Alcaide had to spend over a month in a wheelchair.

You probably saw me around campus last month, wheeling around in my wheelchair. I’m the cheerleader who broke both of her ankles. This was a tough time for me at school, emotionally and physically. I was fortunate because my injuries were not permanent, but I soon discovered that school days at Amador were a struggle. Though my time in the wheelchair was temporary, the lessons I learned while I was in that chair were not.

The first thing I learned was that getting around Amador in a wheelchair is difficult and being able to get to class on time is near impossible.

While Amador may be officially ADA compliant, our campus is not designed for someone in a wheelchair. With a campus as old as ours, the original buildings were not made to be compliant with the modern disability rules and regulations.

ADA stands for the Americans with Disabilities Act. It is a civil rights law that prohibits discrimination based on disability. Under this law, all public places & public transportation must be handicap accessible.

This includes schools, businesses, stores, banks, gov’t buildings, buses, trains, hotels and more. These spaces are required to have accessible premises, bathrooms, doorways, main spaces, technology and information, and more as defined under the law. Since these standards were established in 1990, old buildings were required to reconfigure and reconstruct places that did not comply with the standards.

The most significant challenge I faced on campus was opening doors to get into classrooms, bathrooms, and buildings. Due to the lack of automatic handicap door openers where you can push the button and the door opens, I had to always find someone to help me open doors since I was unable to open the doors myself. I struggled to get into the office, the bathrooms, and classrooms on my own. There is one handicapped button on our campus to access the staff-only entrance to the office, but it doesn’t not work, so that didn’t help me.
The size of the classrooms was also an issue, as all of my classes have so many students and desks in them, there wasn’t enough room to comfortably allow a wheelchair to move around, I had to sit by the door in my wheelchair.
Once I was able to walk a little, I was able to leave my chair outside the classroom and hobble to a nearby desk, but this was not ideal because if there was an emergency, I’d have had trouble getting back to my wheelchair.

The next challenge I had was moving around campus. I noticed almost immediately that we have a very bumpy campus. Most students don’t pay attention to all of the cracks, bumps, and large gaps in the concrete around campus, but these are a major difficulty when you’re on wheels. There are some cracks across our campus that are so large that it is to roll over without tipping or getting stuck. I had to find alternate routes.

The lines for the lunch cafes were both too small for my wheelchair, so I was unable to buy bruch of lunch from either cafe.

Thankfully, all the bathrooms on campus had a handicapped stall with enough room for me to wheel my way in, however getting into the bathroom was a challenge. There was a slope that most students probably never even noticed in front of the J-building women’s restroom, but I noticed when I tried to wheel up it. I rolled backwards down the incline and lost control the one time I tried to open the door, so I never tried again and instead had to find another bathroom further away.

The most important thing I learned while I was in my wheelchair was actually something positive.

I discovered that there are so many students at Amador who are compassionate and willing to help out. Of course there were those students who walked into me, who acted like my wheelchair was in their way keeping them from getting to where they need to go, or who just plain ignored my need for help.

But there were also so many students who opened doors, who helped push me around, and who helped me get to where I needed to go. Surprisingly, many of these helpful people were strangers who were just being kind because they saw that I needed help. I’m so proud to go to a school with so many kind people.

I’m hoping that my experience and this article can elicit changes on campus. I know Amador is old- the buildings are old, the concrete is old, and we have more students than this campus was ever designed to hold, but there has to be more we can do to make everyone at Amador comfortable while they are here.