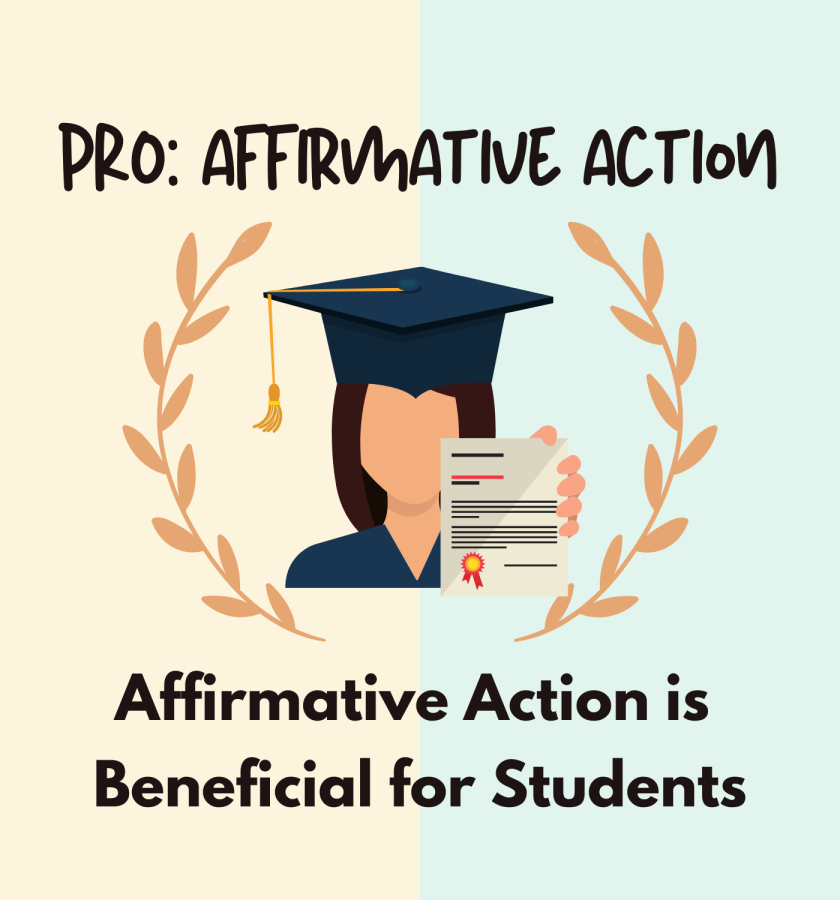 Affirmative action is beneficial to students.

Affirmative action is a set of policies aimed to remove the possibility of discrimination against applicants and has been applied to employment, campaigns, and programs. Why is it not being applied to one of the most competitive selection processes of college admissions?

It is not a surprise that students of color have been underrepresented in colleges and university campuses all across America for decades. Affirmative action intends to make colleges more conscious in their assessment of applicants and to ensure an equal opportunity for all students regardless of race, income, or identity.

One study from the University of Washington described the 23% point decline for students of color (Hispanics, Blacks, etc.) in the possibility of admission into selective public colleges following a ban on affirmative action by law. College admissions consider many factors in a student application: academic performance, extracurricular activities, application essays, race or ethnicity, family income, and interviews; the list goes on.

“We don’t want the people who start off with privilege to just get more and more ahead while the gap becomes too wide. White supremacy [those who advocate for myths like helping POC access education that results in discrimination against Asians] is pinning minorities against each other. If you look at how the policy is set up—where your race should be considered—it’s not like you’re going to have a better chance at college admissions,” said Louisa Landhuis (‘23).

While race comes into factor, income is another detail of a student’s application that colleges put into consideration for an applicant’s admission. Affirmative action is a set of policies that not only aims to make a race-conscious admissions process but also aims to provide opportunities to minorities that have less access to them in society through financial difficulties. The wealth of a family could mean an increased number of opportunities for their children that will push them above the competition: competition between other teenagers who weren’t born with the same privilege.

“I think that affirmative action is an idealistic method to promote social mobility, as it’s trying to essentially combat “unfairness” and measure how much people take advantage of the situation [of affirmative action]…because that would theoretically translate into college [admissions],” said Gryphon Kumfert (‘22).

Having a race-conscious admission process—affirmative action—would mean looking beyond the traditional admission benchmarks that could easily make the application of students of color unnoticed and skipped in review.

“I view affirmative action, like the whole system, as a framework put in place because people are trying to be conscientious of systemic racism and discrimination, but these systems need to be put in place when they [the students] start receiving education, instead of just at the final lap, and claiming we [the colleges] offer equal opportunities for all students of different nationalities and races,” said Tho Nguyen (‘23).

Keeping and enforcing affirmative action for college admissions would mean promoting diversity that’s, unfortunately, lacking in many campuses across the United States and beyond. Lifting the ban–for eight states including California, Washington, Michigan, Nebraska, Arizona, and Oklahoma through voter referenda–would be a step toward eliminating the systematic barriers present in the ever-changing American education system. 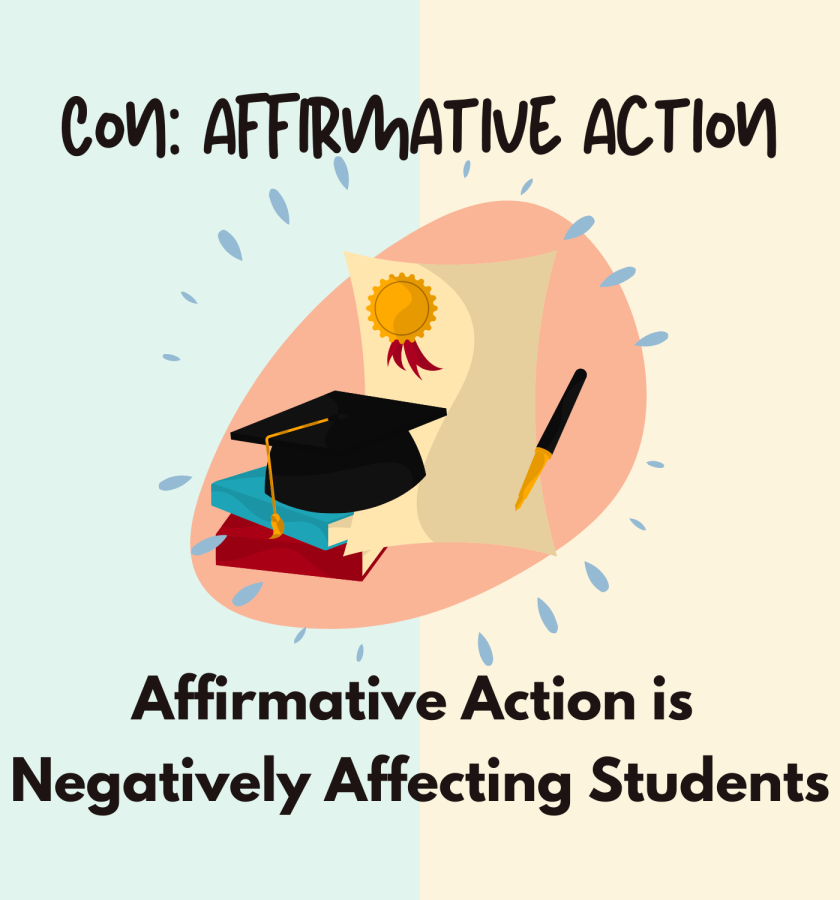 Affirmative action is, in fact, harmful to students.

Affirmative action, which was started in the 1960s, aimed to make it so that people in education and employment would be treated without regard to race, gender, color, or religion. President Lyndon B. Johnson implemented affirmative action in employment, further expanding job opportunities for minorities. However, it has not fully served its purpose.

By lifting the ban on affirmative action, college and university admissions processes will become increasingly biased against certain minority groups such as Asians. Harvard University has kept its “quota” of Asians the same (16-19%), even though the population has doubled, coming under fire with many lawsuits against their admissions committee. Hence, with Affirmative Action, the system will begin to fulfill the quota-based admissions, rather than the academic-based admissions that it has been using as of now.

“I think that in the grand scheme of things, yes, it does help minorities, and people who don’t have many opportunities, but then … it discriminates against another race, specifically Asians,” said Y-Duyen Nguyen (‘23).

On top of specifically targeting certain minority groups, many groups feel that affirmative action is thinking less of minorities, and assuming that they are not able to perform as well as others.

Though affirmative action is trying to help underrepresented groups to the foreground, they are discriminating against majority groups in hopes of a, sometimes, deluded equality.

In a journal, philosopher and ethics writer Louis P. Pojman writes, that “strong Affirmative Action is reverse discrimination. It says it is right to do wrong to correct a wrong.”

However, this systemic racism is not something that can be changed with just one “solution.” By adding affirmative action into college admissions and employment options, it discriminates against people who have worked their entire lives, in favor of filling a quota. Doing so does not help the population as a whole.

Though this deluded version of equality created by a quota-based system gets representation in workplaces, it doesn’t fulfill the original purpose, which is to create equality for everyone.

“It would be great if colleges wouldn’t be able to assume [based off of race], and [make] their decisions off of what is sent to them in the students’ application,” said Montana Parkinson-Lubold (‘24).

With consideration of neighborhoods with high crime rates, and consideration of communities without access to necessary resources and education as a whole, implementing a process of achieving equality would be required in every town, every community, and every state in the country.

By creating access to quality education around the country, in kindergarten and elementary school, it is possible to eliminate the idea of affirmative action in colleges and workplaces, and rather, open up the idea of naturalized equality.