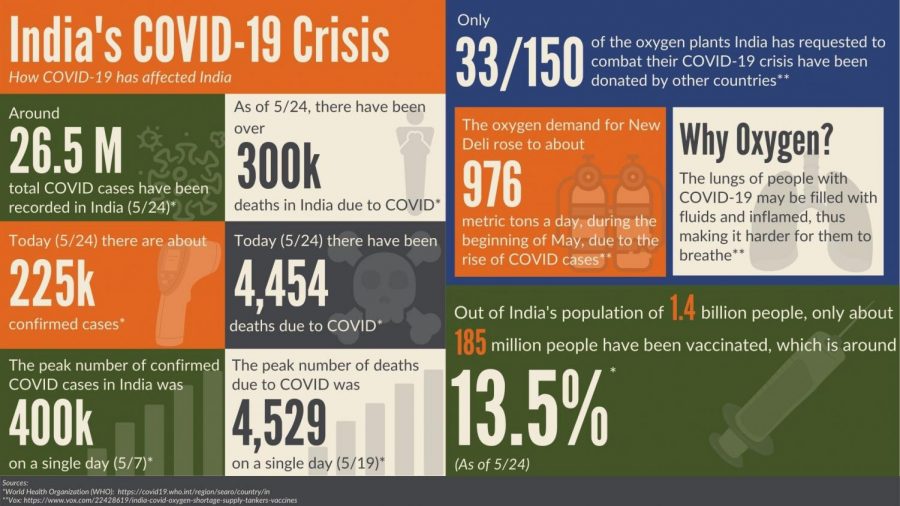 Around 26.5 Million total COVID cases have been recorded in India.

Starting in Wuhan, China, the COVID virus has traveled the world. After more than a year of battling against this life-threatening disease, many countries have seen cases drop by the dozens in the last few months. However, not all countries are faring that well.

A country with a population of 1.4 billion, India has been hit with its second wave, and it is devastating the country. With more than 300,00 cases, and 3,000 deaths a day, this populous country is struggling to break free. Without access to oxygen, hospital beds, and vaccines, the people of India are suffering.

“The healthcare infrastructure was not prepared…they ran out of oxygen, they ran out of hospital beds, they don’t have health care workers,” said Harini Krishnan, Indian-American Democratic Organizer for Gender Equity, Racial Justice, and Public Education at Harvard Kennedy School.

“Because they’re working 16 hours [to] 20-hour shifts, you hear of hospitals, whether it’s a main city or rural place, where people are waiting in line for a day with their loved ones, waiting for oxygen, dying in the waiting room,” said Krishnan.

Mass gatherings for the sacred Hindu pilgrimage, the Kumbh Mela, saw more than 9.1 million people travel to the Ganges River. On top of this, the Modi government has also held rallies in many states such as West Bengal, and Tamil Nadu, further exacerbating the situation.

Statistics concerning the situation show alarming numbers. Of 1.4 billion people, only 185 million people have been vaccinated, resulting in only 13.2% of the population being vaccinated.

Though the government has started building oxygen plants, only 33 of the 150 requested plants are functional. Combined with high levels of pollution, especially in cities like New Delhi, there is country-wide desperation for oxygen.

“At this time in India, even if you’re a politician’s son, you’re not guaranteed a hospital bed. The most influential, the people with the most power are not able to get access to health care. Imagine a common man, a day laborer. What chance does he or she have of surviving a pandemic like this?” said Krishnan.

However, other nations’ responses to the COVID crisis in India have been very helpful. The United States, United Kingdom, France, and even countries like Ireland, have sent aid such as oxygen concentrators and ventilators to India, furthering the government’s efforts to stop the spread.

Additionally, the government has also placed lockdown measures in states like Karnataka, which have been extended to June 7th. Though the distance is large, Indian-Americans in America has also gathered to aid in slowing the spread.

“I think what is really frustrating for Indian Americans living in the US, is that there is nothing we can do to help, except send donations, money, and that’s what we’re doing… We’re all gathering together, we’re trying to find a support group, and we’re trying to send money to India,” said Krishnan.

Though India’s government could have taken greater action early on, India is seeing a decline in its case numbers. From 4,000 deaths a day, as of May 8, it has now reduced to 3,000, sending hope to Indians all around the world.

“With more planning, and definitely an emphasis on helping people rather than prioritizing [politics], this could have been [mitigated]. I’m not saying necessarily that this pandemic would have been averted, but I think its effects would have been less devastating for sure,” said Krishnan.