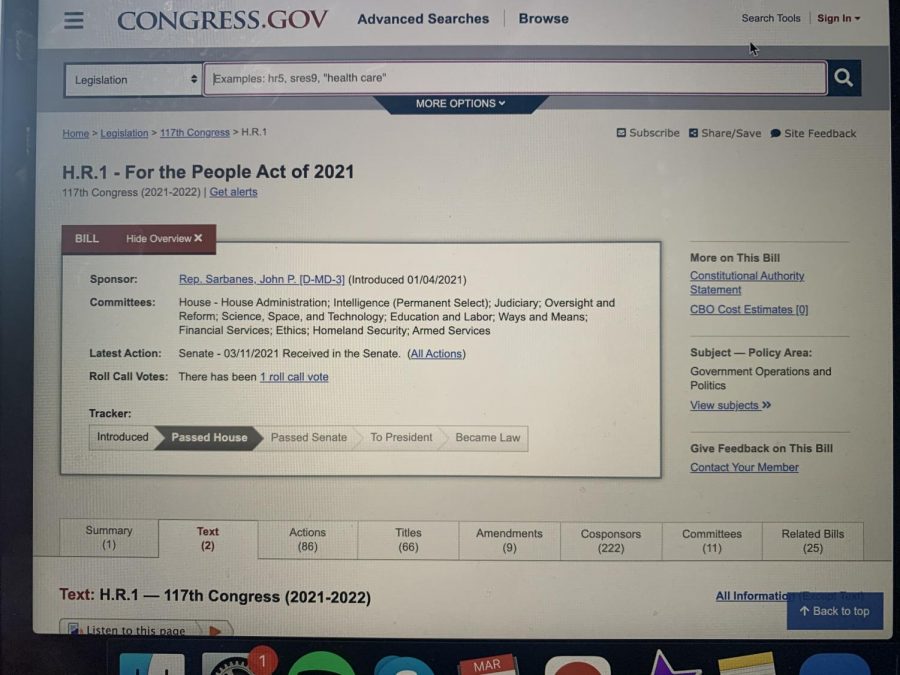 H.R.1: For the People Act of 2021 was passed by the House of Representatives on Wednesday, March 3rd.

H.R.1 is divided into three topics: voting, campaign finance, and ethical standards in the three branches of government. Regarding voting, the bill combats numerous forms of voter suppression across the country in an effort to make voting more accessible to the American public.

“I believe the most important voting rights provision in H.R.1 is the establishment of national automatic voter registration. . . . Automatic voter registration increases both motivation and accessibility to the vote; it would also increase the abysmally low voter turnout rates for young voters,” said AV Competition Civics member Cassy Ying (‘21).

Another component of H.R.1 is the effort to eliminate partisan gerrymandering by requiring states to have independent redistricting commissions. These commissions would be responsible for drawing electoral district boundaries, therefore influencing future elections.

“This nation has struggled with diluting a vote’s weight by gerrymandering and dishonest redistricting. Independent redistricting commissions would allow for the creation of fairer district maps with less political bias towards a political party,” said AV Competition Civics member Grace Chen (‘21).

H.R.1 also addresses the importance of transparency in the financing of political campaigns so that politicians can be more accountable to the people. Political campaign donations are significant because they have the power to influence what a candidate’s policy priorities will be if he or she wins office.

“Much of the money that funds political campaigns comes from an unknown or unverifiable source. If we increased the transparency of these funds, we could have a more honest political system that did not enable private corporations to fund and control individual politicians,” said Junior State of America President Raahim Nawaz (‘23).

The 117th Congress is closely divided along partisan lines and the fate of major bills such as H.R.1 can be decided through narrow margins. Although the bill passed the House of Representatives, it must pass the Senate by a simple majority to be enforced as law.

“Considering that the Senate is 50-50 split, there is a good chance that HR 1 will pass. If senators vote across party lines, Vice President Kamala Harris will be the tiebreaker, and she will most likely vote to pass it,” said Chen.

Although H.R.1 hopes to bring about massive voter expansion across the country, some argue that there are still forms of voter suppression that are neglected in the 791-page bill.

Despite its possible shortcomings, H.R.1 will have a nationwide effect on voter rights, campaign finance, and ethics if it passes the Senate.