Texas and Mississippi open up 100% with no masks, setting a bad example for the country 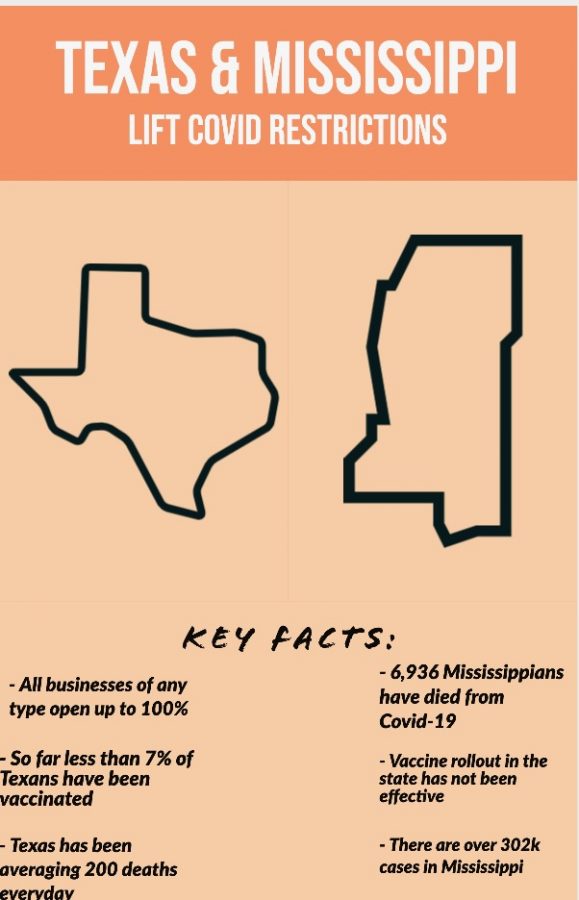 The Texas and Mississippi governors have opened the state and lifted the mask mandate.

Greg Abbot, the governor of Texas, has ended the Texas statewide mask mandate. This means that Texas will be able to open up stores, restaurants, and other businesses at 100%.

While governor Greg Abbot thinks it’s a good idea to open up Texas, the virus remains substantial across the state. Texas has been averaging over 200 reported deaths every day for the past week. In addition to the reported deaths, the governor promised that Texans will be vaccinated and the process will accelerate soon. So far less than 7% of Texans have been vaccinated.

Not only have the deaths been going up and not enough vaccinations, the Texans and Americans that are of color have been disproportionately affected by the pandemic.  The majority of the covid cases have been either Black or Hispanic people. As of right now, more than 40,000 people have died in Texas from the virus since the pandemic began.

For this pandemic to be over people in power such as governors need to listen to science. People need to stay inside and wear a mask when heading outdoors. I think that the governor is insane to be willing to risk the lives of millions by ending the mask mandate and opening businesses.

“I feel that the mask mandate being lifted in Texas sets a horrible example, but is unsurprising. His lifting of the mask mandate is especially harmful because many people neglect the fact that a mask is also a key factor in protecting others rather than only protecting yourself. So, now that masks will not be required, people will feel justified in not caring for how their actions affect others, which only divides us more as a population and teaches us to be more selfish in an already individualistic culture,” said Yasmine Ahmed, Texas resident.

Meanwhile, in Mississippi, the same issue is happening. Governor Tate Reeves’ new masks mandate was in effect on March 2nd. The state is now open to 100% capacity and all businesses are open. The governor receives backlash for the very harmful new mask mandate. He tries to defend himself by saying that the level of the virus doesn’t and shouldn’t affect business opening.

Governors Gregg Abbot and Tates Reeves have made millions disappointed and frustrated.  Since they opened the state to 100% they are risking another big surge of cases and the lives of millions. I believe that the governors are only doing this because they refuse to believe in science and they don’t understand that a virus isn’t going to go away because you want it to. At the end of the day, people need to wear a mask.