How unlawful protests harm our democracy 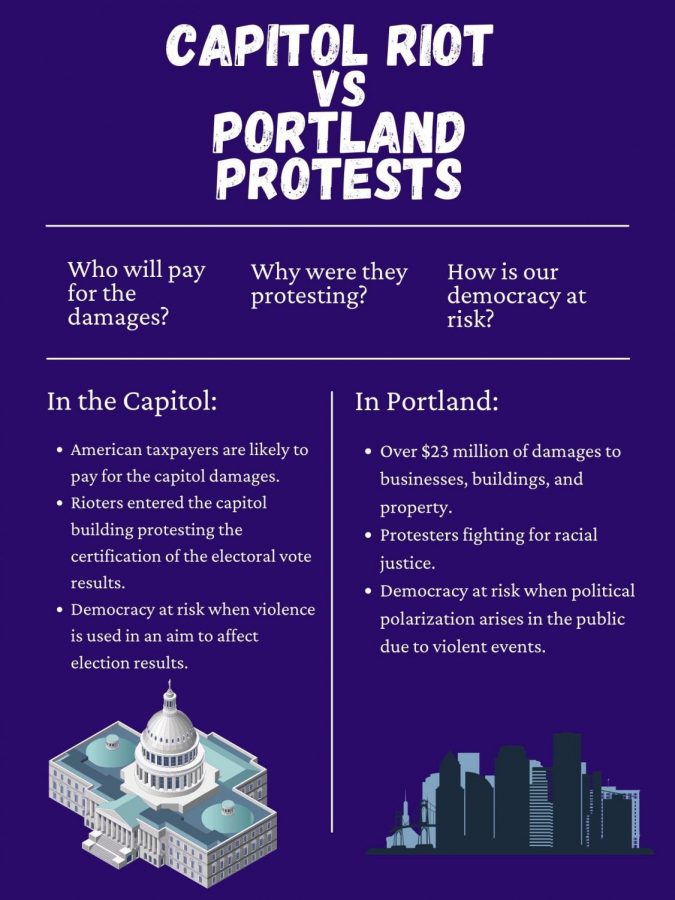 After the capitol riot on January 6th and the continuing protests in Portland, Oregon, unlawful protests are harming the American democracy. So how exactly are protests like the ones seen on the news costing Americans their democracy?

The answer can be found in big companies giving money to political candidates as well as the cost that protests leave in their wake. The political division caused by misinformation and public opinion through social media and news outlets allows people to believe anything.

“The capitol riot and the riots in Portland obviously affect those who are directly impacted by the fighting, violence and looting. However, footage of Portland protests were used as evidence by some media outlets to push a certain ideological angle. This can have drastic consequences for American political polarization, and unfortunately results in the further nationalization of our elections, even at the local level,” said Edward Ding (’22).

Democracy is a system of government where the public elects representatives to govern. With the capitol riot not allowing democracy to run its natural course with elections and counting votes, Americans are greatly impacted by these events.

“The entire country loses out in the end. Ultimately it may be that our democracy itself becomes the biggest casualty of these violent events,” said Ding.

After riots like these, a question hangs in the air: who exactly needs to pay for all the damage?

The capitol riot caused big businesses to reevaluate the political donations they were giving to the former president, Donald Trump. But American taxpayers will be the ones to pay for the damage that rioters caused the U.S. capitol, as the building is not under any insurance.

“The people directly involved— congress members, aids, staffers, and policemen defending the capitol— and those who lost their lives are clearly the most affected. Outside of that, I think younger Americans are very affected because a lot of us are watching everything happen on social media, and we don’t have much experience with a “better” version of America that many people have talked about,” said co-president of the High School Democrats of America club Kyra Sande (‘22).

In Portland, Oregon, almost 80 nights of protests have gone past the $23 million mark in damages for downtown businesses, including $300,000 damage to public buildings and $4.8 million in property damages to businesses.

“Events like what happened in Portland can highlight the desperate need for and drive change in institutions like law enforcement. Events like what happened at the capitol illustrate to Americans the dangers of widespread misinformation and the fragility of democracy,” said co-president of the High School Democrats of America club Maha Parsons (‘22).